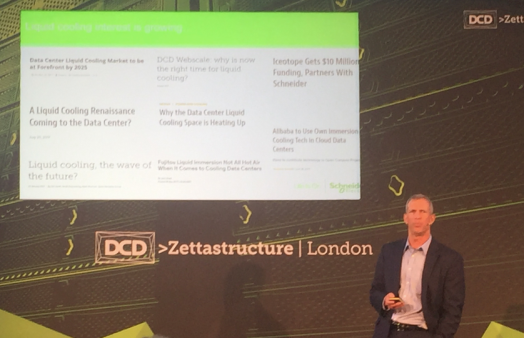 The CTO of Schneider Electric’s IT division Kevin Brown said he expects direct liquid cooling (DLC) to become increasingly important in the near future.

Brown was speaking at the Datacenter Dynamics, Zettastructure event in London on 7-8 November.

Schneider has previously hesitated to endorse the technology despite its $10 million investment in DLC start-up Iceotope.

However,  speaking at the London event Brown said the technology will be more widely adopted as rack power densities increase due to the expected growth in GPUs and other factors.

Immersive DLC – where servers are submerged in dielectric fluid – can enable operators to lower cooling costs by more than 15% compared to conventional air-based cooling, according to Schneider. The company is expected to release more details of its TCO analysis in the near future.

Brown referred to some of the articles on DLC from Datacenter Knowledge including one of my recent columns.